The Impact Center table at Best of SJC Bqnquet; 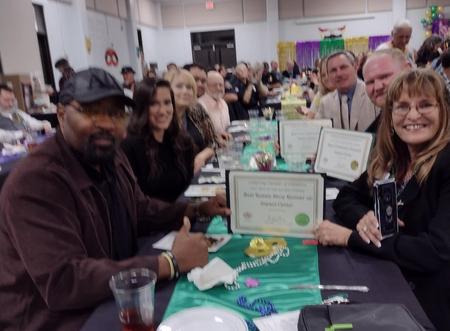 It’s February already! Rain and wind have caused some meetings to be re-arranged because of the weather. One big event was able to go forward and it was a great success! Coldspring Chamber of Commerce held their first big San Jacinto County Awards Banquet on Saturday January 28. This was the first time we had been able to use Jones Hall since Covid hit us. The Hall was full and the evening was filled with music from DJ Joe LeBlanc and catered by Mary Gray. The food was delicious and Joe kept things moving by announcing door prizes throughout the evening. President Barbara Justice welcomed the guests and brought them up to date on the past year’s activities. She invited those who had not been to the Chamber Office to see the remodeling which has been completed over the last year. VP Katheryn Hall led in giving the Pledge and presented the awards. Cassie Gregory gave the Invocation and Christina Mallett announced the Auction winners.
The guest speaker was our State Representative Ernest Bailes. He reminded everyone he was a local boy as were his ancestors and went on to explain how the Legislature worked. From submitting a Bill, to it going through what seems to be innumerable committees, with amendments made upon amendments, it is a difficult procedure. He added that the State is working on how to use the excess funds in the coffers. Rep. Bailes said there were many different ideas on this situation and it would take a lot of time.

Awards were given, photographs were taken by Tony Farkas of the San Jacinto News Times, which won in the favorite newspaper category and also by Terri MacIntyre, who is also Director of Shepherd Library. (I took a few too!)
The full list will appear elsewhere and also on the Chamber web site but I must mention how well represented Shepherd did this year. Voters paid attention to the online ballot as well as writing in for their favorite business, person or non-profit organization. So The Children’s & Community Impact Center came in second in two categories, won first place for Community Outreach and Teddy Elliot won first place as Volunteer of The Year! He also received a plaque which will hang permanently in the Courthouse . Citizen of the Year was Brenda Myers for her work as Founder of the Impact Center. She talked about the how she was inspired to begin working for young people when so many of them faced great hardship, even to the point of some committing suicide. She began ‘Hug a Tree, Kiss a Fish’ a free weekend for families who could not afford to take their children for time out fishing or camping.

Best Towing Company was Will Hall of Shepherd, while Best Bar was ‘The Den’ on the outskirts of Shepherd. T D’s won for Best Gas Station. More Electric and Calvert Plumbing came in first in their categories and Linda Deeter won as Best Artist. Paradise on the Square won for best gift shop and Paradise Grille for Best Breakfast.  Also featured was Ms Sandra Houston, wife of Constable Sam Houston, whose work with rescuing dogs has been noted several times in the newspaper. Best DayCare was ‘God’s Precious Creations’ owned by Joyceyln Traylor. Best Ministry was St. Galilee in Coldspring, Harris ‘Red’ Blanchette won Best JP,  Commissioner Marrs won Best, with Commissioner Brandon second in their category. There were many more winners, please look them up on the Chamber web site.

Shepherd Chamber invites nominees for Board Membership after Board member Bruce McInzie moved out of state to be with his ailing parent. If you are interested in being a member of the Board which meets once a month on the fourth Monday of each month, please email a short bio about yourself to the Chamber web site www.greatershepherdchamberofcommerce.org  . You can also call me at the number below if you prefer.

Members of SJC Women’s League will be sad to hear that member Linda Winkelmann died on Sunday January 29. Her sister Sylvia Roeseler held the funeral for her husband Gene this week. Prayers are asked for her and Linda's family at this very sad time. SJC Republican Chairman Dwayne Wright announced the death of G. Nick Carter who died on January 28. Please remember his wife Ms. Sharon and family in your prayers.